The Grew foundation was established in 1950, named after Joseph C. Grew (1880-1965), who was the U.S. Ambassador to Japan from 1932-1941.  He worked hard to avoid the war between the two nations until the last moment.  After he returned home, Grew published a diary, Ten Years in Japan, describing his experiences during his ten-year tenure in Japan.  When he learned that the Japanese version of his book, published in 1948, was selling well, Grew thought of donating the royalties to certain programs useful for the postwar reconstruction of U.S.-Japan relations.  He consulted his close Japanese friend Ayske Kabayama (1865-1953), then president of the America-Japan Society in Tokyo, asking for his advice.  Kabayama, who had studied at Amherst College and thought highly of liberal arts education, proposed establishing a scholarship foundation for promising young Japanese students to study in the United States.

In 1950, Kabayama decided to launch a nation-wide fundraising campaign for this project using Grew’s contribution of about 5 million yen (about $13,500) as seed money.  The campaign received strong support from influential political and business leaders in Japan, including the prime minister and the governor of the central bank.  Emperor Showa also expressed his gracious endorsement.  Kabayama was successful in raising 68 million yen, an enormous amount in those days.

In August 1953, four students left Japan as the first group of recipients of the Grew Foundation scholarship.

In 2014, the Foundation was recognized for its contribution to the U.S.- Japan relationship at the joint summit meeting. 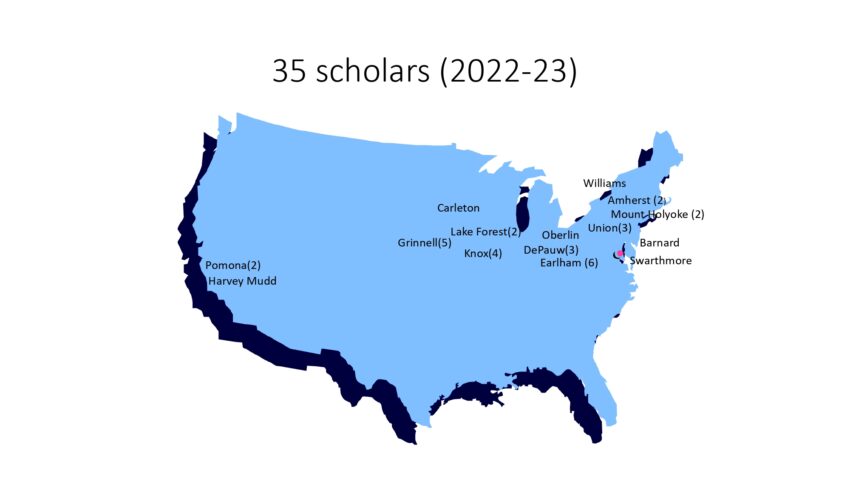 The U.S. – Japan partnership is widely recognized as one of the most important bilateral relationships, sharing common values including democracy and a respect of human rights to serve for stability and peace in the world.  To maintain and enhance such a partnership, it is indispensable to nurture and sustain personal trust between individual citizens of the two nations.

Since the establishment of the Foundation, the scholarship recipients have been able to develop fine and resilient characters to meet new challenges, benefitting from the rigorous educational programs in the U.S.  Many recipients of the scholarships have become active leaders in the public and private sectors, and have contributed not only to strengthening U.S. – Japan bilateral relations, but also to promoting mutual understanding and cooperation in the international community.

The Foundation believes in the fine quality of education at many liberal arts colleges in the U.S. and sends its scholars mainly to residential liberal arts colleges with a student body of around 2,000, rather than to large universities. At liberal arts colleges where the student body is small, and the student-to-faculty ratio is low, students can develop a fine character and become useful citizens of society.  They can learn from professors directly, who are eager to share their knowledge in small classes, can train themselves to think critically and can participate in discussions in an active and effective way.  Living in dormitories and sharing life with students from the U.S. and other countries, they will be exposed to new experiences at the age when they are most receptive to a new environment and perspectives.  Outside of class, they will be encouraged not only to participate in extracurricular activities but also to take a leadership role.  At these small institutions, students can develop the ability to acquire new knowledge for many years after graduation that is indispensable in this fast-changing world.

Scholarship for 2022 (subject to change annually)

We offer information/educational program to support high school students in both countries based on our relations/experience with liberal arts college.  (detail to be announced shortly)

We invite you to join our efforts to support and strengthen the scholarship program of the Foundation and assist us in our endeavor of nurturing leaders for future generations.
The Foundation was given status as a public-interest promotion organization from the Japanese Ministry of Foreign Affairs since 2009.  Contributions to the Foundation are deductible from income tax for residents in Japan.   Similarly, Grew Bancroft Foundation (USA) is a tax exempt organization in the U.S.